Today’s stop on the tour will feature one of my favorite areas on the UT campus: the East Mall

Students on campus at The University of Texas at Austin walking and studying in the East Mall in between classes during the fall semester. (Photo: Alcalde, Official Publication of the Texas Exes)

The first thing you notice when you walk through the East Mall is the statue of Dr. Martin Luther King Jr, which is only one of two statues of MLK on a college campus.  Completed in 1999 this particular statue of MLK was put in place due to an initiate from Student Government, students wanted more diversity represented on campus, which is just one example of how influential Student Government is at UT Austin.

The East Mall is also home to some academic colleges as well! The Jackson School of Geosciences became its own college off of Natural Sciences due to alumnus and late Dallas oilman John A. Jackson, who gave $40 million in 2002 to establish the school and the rest of his estate in his will when he passed in 2003 totaling $272 million making it one of the largest benefactors ever to a single public university. On the off-campus Pickle Research Institute site, Geosciences has the largest fossil collection in Texas, 7th largest in the United States!

Finally, my favorite building on the entire UT campus is the Student Activity Center or the SAC. The SAC opened in the Spring of 2011 and is another example of the influence of Student Government. The building of the SAC was passed through student government in 2006 and has been paid for by students through their fees. The SAC was also built with sustainability in mind. Entering into a voluntary certificate program, the SAC strives to achieve the Leadership in Energy and Environmental Design (LEED) Gold rating. 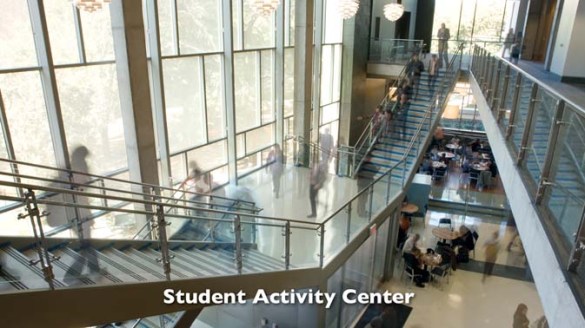